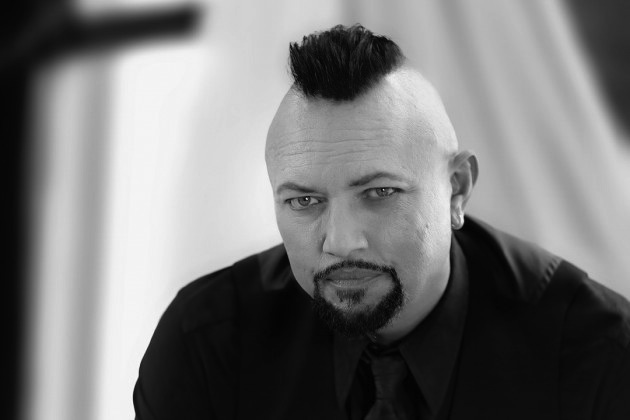 The iconic metal vocalist Geoff Tate is universally acknowledged as one of the greatest frontmen in rock and metal, and a driving force behind one of the most innovative bands in mainstream music. He rose to fame in the 1980s with the progressive metal band Queensrÿche (he has sold more than 25 million records with the band he fronted for 30 years; the album «Empire» of 1990, sold more than three million albums on the back of hit singles and radio staples “Silent Lucidity” and “Jet City Woman”).

He named his new project after the Queensrÿche album of the same name, the masterpiece “Operation: Mindcrime” (1988, Platinum in 1991).

Operation: Mindcrime is a creative platform that continues in the spirit of the historic album, spawning concepts as grand as the music.

Geoff Tate: «I spent 30 plus years writing music under the name Queensryche so in my new project OMC, there will be similarities of course but my new music leans more in the Progressive Rock style. My motto is “NO LIMITS”».

Why did you choose the name Operation: Mindcrime for this project?

Tell me about your new album “The Key”.

«The new album “The Key” is both a linear story AND a puzzle. It has four main characters and a plot that twists and turns and takes the listener on a tumultuous ride to an interesting pause, a point of contemplation, before the beginning of the next album».

You’ve worked with some well-known names on the album. Tell me something about it…

«The members of my current touring group are Kelly Gray and Scott Moughton on Guitars, Randy Gane on Keyboards, John Moyer on Bass and Simon Wright on Drums. Kelly, Randy and I started playing and writing music together in 1979. Both of them have played with me on Queensryche albums and on tour. Scott played on my first solo album and has toured with me at various times. I met John when he was playing with Disturbed and we played together at the Sturgis Motorcycle Rally. Simon and I first met when he was playing for AC/DC back in 1986. Really great guys and exceptional musicians».

And what’s the plan for releasing the II and III part of the trilogy?

Do you think most of the fans who follow you now are Queenryche fans or did you bring in a new fan base?

«I think that any one that has enjoyed Queensryche music will like my new music».

What kind of show you’ll bring in Italy? I’ve heard that you are going to be playing the album “Operation: mindcrime” as a whole, and what other material can we expect to hear?

«I will perform the album “Operation: Mindcrime 1” in its entirety followed by selections of music from my past albums plus a few tracks from the new album “The Key”».

You’ve always taken a great deal of care in how you present yourself on stage – often you’re very theatrical – do you have anything in particular in mind for Operation Mindcrime?

«OMC is a very PROGRESSIVE musical project and because of this it gives me room to stretch out creatively in all areas».

So you’ve performed in Italy many times and people here really love you… what do you think about our country, our culture and do you know of any italian bands?

«I have been to Italy many times over the years. I have played concerts mainly in Milan and Rome but I have visited Florence and I spent a wonderful week at Christmas with my family in Venice once. Italian culture has influenced the world in many ways and especially in the arts. I grew up listening to and performing Italian classical music and later was influenced by PFM. In 2007, I recorded a song in Italian, originally performed by Carlo Marrale and Cheope, called ODISSEA, for an album called “Take Cover” by Queensryche».

You’re a very creative person. Do you express your creativity in some extra-musical activity too?

«Yes. In 2007 I released my first vintage of wine called INSANIA. This month I released the first INSANIA vintage available in Europe».

Thank you for the interview.
Elisa Russo